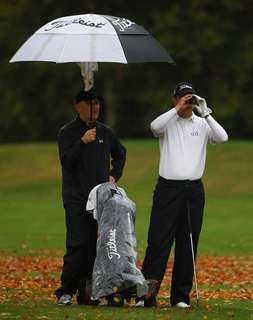 From the days when selecting a club was done by “eye”, we have progressed through yardage books, a development often attributed to Jack Nicklaus, distance markers at the sides of fairways and distances on sprinkler heads, to a point where electronic distance-measuring devices, have become quite common in certain areas of the world.

In November 2009, The R&A and the USGA issued a ‘Joint Statement’ on electronic devices, including distance-measuring devices, to clarify how the Rules are applied in relation to these devices. See the full Joint Statement here.

Most of the questions that we receive in connection with the Joint Statement relate to distance measuring devices, and some of the most common questions, along with the answers, are provided below.

Q. Can I use a distance measuring device in a competition?

A. The use of distance measuring devices during a stipulated round remains contrary to the Rules of Golf – the penalty being disqualification under Rule 14-3 (Artificial Devices, Unusual Equipment and Unusual Use of Equipment). However, since January 2006, a Committee can permit the use of some such devices via a Local Rule.

Q. What kind of distance measuring devices are allowed by Local Rule?

A. GPS, laser, any really; however, it is important that the device only measures distance. The use of a distance-measuring device that is designed to gauge or measure other conditions that might affect a player's play, like gradient, wind speed or temperature, is not permitted, regardless of whether such an additional function is used or not, and even if that function is disabled.

To help golfers and/or officials to determine the status of a particular device, The R&A has produced a flowchart explaining what is allowed when the Local Rule is in place:

Q. What about multi-functional devices, such as a mobile phone, with a distance measuring application?

A. On the course, subject to any club or course regulations, a multi-functional device may be used to phone, text or email – provided the purpose is not a breach of the Rules, e.g. you are not asking for advice.

When an application that measures distance has been downloaded to the device, the application must be restricted to providing only distance information in order to conform to the Local Rule. If there are any other features or applications on the phone that gauge or measure other conditions that might affect a player’s play, such as a temperature gauge, compass or anemometer, this would render the device non-conforming regardless of whether these other features or applications are used or not.

The flowchart referred to above also covers the use of multi-functional devices and should be of assistance determining whether a certain device is permissable or not.

A. The wording of the recommended Local Rule (Appendix I, Part B, 9) reads as follows:

[Specify as appropriate, e.g., In this competition, or For all play at this course, etc.], a player may obtain distance information by using a device that measures distance only. If, during a stipulated round, a player uses a distance-measuring device that is designed to gauge or measure other conditions that might affect his play (e.g., gradient, wind speed, temperature, etc.), the player is in breach of Rule 14-3, for which the penalty is disqualification, regardless of whether any such additional function is actually used."

Q. Why not simply allow distance measuring devices without the need for a Local Rule?

A. The advent of distance-measuring devices and their use in the game divides opinion at many levels. Many golfers are fans of these devices as they feel it puts them on a level footing with tournament professionals who have caddies providing distance information, whilst others will argue that there is no place for such technology in the game. As such, it was, and remains, appropriate to allow individual clubs and Committees to decide what is right for them, their competitions and their players.

A. No. It is the responsibility of the national golf association to establish its own Local Rules for the event. Those Local Rules supersede what the Club has in place on a day to day basis.

Q. Does The R&A permit distance measuring devices at events like The Open Championship or The Amateur Championship?

A. No, it doesn’t, but ultimately it is for each individual Committee to decide whether it wants to allow the use of such devices for play on its course or in certain of its competitions. In the absence of a Local Rule, the use of such a device is contrary to the Rules of Golf, so always check the Local Rules!

A. Yes…although it is important that players sharing devices do not unduly delay play.